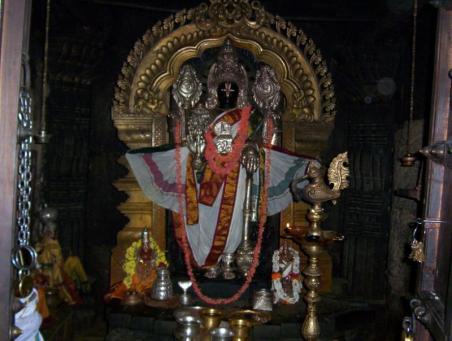 This is the Sowmya Keshava swamy idol at Nagamangala. The temple of Chenna Keshava near Hassan also has a very old and big idol of Keshava.

Acharya Madhwaru gave the vigraha of Keshava to Erki mutt Upadhyaya and then went to Kokkada where he began the composition of the work “KrishnAmrutha maharnava” and it may be because of this that he begins this with a prayer to Keshava. Here is a Kannada translation of the opening prayer by Gurugalu Shri Bannanje Govindacharyaru.

Let that Keshava who bestows the state of deathlessness

On those who sublimely offer their gratitude ,

Worship Him with abiding devotion

Think and contemplate on Him,

Sing , dance and rejoice in His magnifcience

And listen to His glory in rapture, protect and uplift me. ||1||

Shri Prasanna Shrinivasa dasaru’s poetic commentary on this name of the Lord translates to ,” O Master and Lord, Keshava, I offer my humble obeisances to You again and again. You are the giver of fame to Brahma and Lakshmi. You enable them and make them perform as per their potential and shower bliss on them for the fulfillment of service,well done. Serving You is their source of bliss.You are the only One who is eligible to be contemplated on day after day and night after night,eternally.O Janardhana, You are the destroyer of the terrible wicked demon named kEshi. You are the controller of Brahma and Shiva being the one of Supreme unparalleled strength and power.”

Srimad Acharyaru in the fifth stotra among the twelve sings in glory of this nama.

Shri Prasanna Shrinivasa Dasaru says ,”brahmanigu lakshmigu keerti koDuva swAmi neenu”. Laskhmi who is eternally free from bondage or transformation is the controller of Avyakta tatva which transforms the basic material for creation and Brahma is the creator of Brahmanda.

He is not the selfish task master, but the most compassionate Supreme who inspires excessive devotion towards Himself who , though being in a position to demand and make others acquesence, He does not choose to do it. He gives the opportunity and makes each one perform as their own ability .

Laskhmi is reverred in the world and this reverence is caused by the bountiful glory of the Lord who gives her this status as the Empress of wealth, the symbol of auspiciousness, the compassionate mother. Sri Purandara Dasaru glorifies Lakshmi as being the most blessed, the most reverred and cherished one .”Enu dhanyalo lakumi enthA mAnyalo ” Her service to the Lord is the one that bring Her such glory, disclosing that the Lord has enabled Her to perform such service and bestows the resulting glory.

Brahma too has the great place of “creator”. He resides in Brahma in the same form and makes him do . Brahma is the controller of the chitta, memory shell and it is with his grace that one can use memory to enhance one’s knowledge and move towards the goal of exiting from the cycle of birth and death.

Brahma shabda also means Vayu -MukyaprAna. Vaya-bandana. He holds the entire worlds together. He performs the hamsa japa continuously in all jivas throughout the Brahma kalpa enabling them to engage in sadhana . All this is possible because of the Lord’s grace.

These are just small descriptions of the great works being done by the great entities. If all of these entities are enabled by Keshava – what unimaginable limitless strength must He possess ! The position of Lakshmi is eternal. Brahma and other deities are enabled to discharge their duties for the Brahma kalpa which is along long time 32,104 000   crores of years.

I bow down to this Supreme Keshava again and again.

He is the vanquisher of the wicked demon called Keshi. He destroys the demonic qualities that arise in the mind . Contemplating on His exquisite qualities leads to destruction of the negative qualities in the mind. Dasaru addresses Him as “Janardhana”. The one who destroys the cycle of birth and death. By removing our mental defects and eradicating ignorance, Keshava bestows us with freedom from samsaara .

He is the controller of every deed of everyone beginning from Brahma and Rudra. If one asks How so? The Dasaru replies ,”mahArha balashaali” He is the one who has such ability to control and who is the most capable one worthy of such control too, possessing Supreme unsurpassed strength and power.