Shree Prasanna Shreenivasa dasaru has described in detail the gunas of the Lord which can be contemplated with the name “bhutabrit” .

He says ,”You provide nourishment to all the living beings and hence You are their supporter. The entire universe of sentient and insentient beings is completely under Your able control. You dispense every experience of each sentient being.  You are the bearer of everything,O Shreepate. This is the way in which the Vedas , smrithis describe you and this implies that it is the experience of some sidda. You are the “Vibhadavyaya” meaning your Vaibhava, glory is never to be diminished and it is infinite in time , space and attributes. You are hence known as “Avyaya” . You are Ishwarah as You are the only one capable of holding everything in its place and have the power to do so effortlessly.” I bow down to you in reverence and gratitude.” 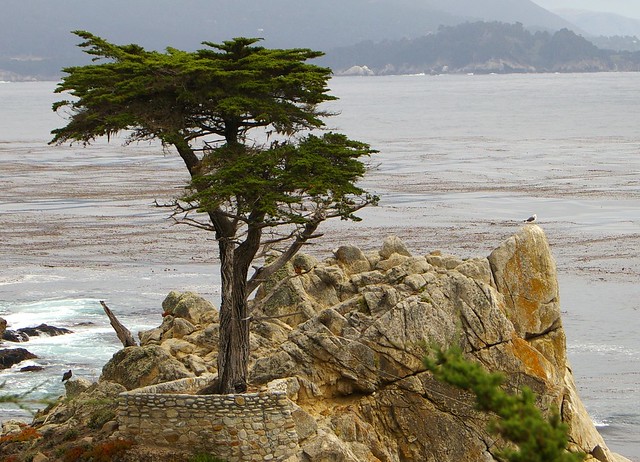 The lone cypress on Monterey bay is a standing example. It is a very old tree , continuously battered by high speed winds and salt spray from the sea, but it continues to stand and thrive. ” It is is His wish that protects and nourishes, inspite of all odds.

Every small thing which we usually take for granted , exists and is supported by the Lord Vishnu who is described as “Bhutabrithe”.

The earth, the atmosphere, the amount of oxygen in the atmostphere, the gravitational pull  and many many more. Let us look a little at each of these things which are totally essential to our well being but which we take for granted.

Earth is the base and support for all our activities. We stand, jump, walk, drive. We build houses and resorts. We dig tunnels and mines. We sow and reap. We grow trees .All our food comes from the earth. Without the earth, we cannot survive. Without food it is impossible to survive for long, but without oxygen it is impossible even for a few minutes. Even though all creatures require oxygen, it still gets replenished during the process of photosynthesis . The magic of photosynthesis not just creates food but also provides for oxygen while cleaning the air of carbon dioxide. And to be able to do any of these ie standing on the earth, growing food etc we need the constant attraction towards the earth for which we do not need to expend any energy. The roots of plants are held firmly in place, the rain water seeps into the earth nourishing the roots , providing for drinking water which gets filtered and clean.The food we eat goes into our intestine effortlessly due to gravity.The rivers and mountains, the seas and oceans are all governed by the laws of gravity and are hence beneficial to life on earth.

What If There Were No Gravity?

The universe would be flat and featureless, says a University of Towson physicist. Harder: how about if gravity were switched off at a certain point after the universe formed?

“I would expect that [Earth’s] constituents, including its atmosphere, and oceans, and us, etc., would drift apart or even fly apart, assuming that the Earth would still be spinning,” he said.

We’d be gasping for air, but that would be the least of our problems: we’d also be grasping for the very atoms in our bodies, and even the rapidly scattering particles in those atoms, all the while lamenting the way times had changed!

The above is a part of an article published in “Scientificemerican”

These are all discovered by Science. But who is the entity who sustains this? Who provides the continuous energy for this? That is the question which can lead us to think? That gravity exists, that it pulls everything towards the centre of the earth at 9.8m/sec etc are all known through science, but the “Why” or “How” is not answered by it.

In general for any activity to commence and take place without hindrance we need a competent person to design and sustain it.When this is so even for a small garden,a farm, a pet, a family , a relationship, then how much more competence should be required of the entity who does all these and more effortlessly. This is what is described in the Vishnu Sahasranaam as “Bhutabrit”.